CrossFit Skirmish trainers are pretty special, with credentials which include CrossFit plus a range of other qualifications and experience.  These include: sports science degrees, British weightlifting qualifications and other types of sports coaching (Judo, Rugby and Specialist Kids training).  Our trainers are skilled at programming and scale all workouts to your current skill level to ensure that safe technique is not compromised.    In addition to general class coaching, you can also book 121 sessions with any of them to perfect technique or indeed provide you with accellerated programming and personal training. 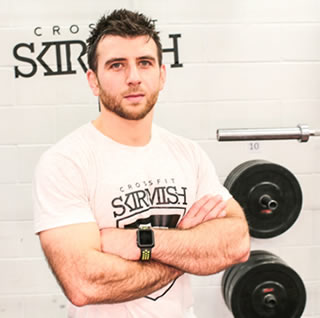 Alexander, Sasha for short, is our Head Trainer and a Russian power house.   Sasha’s first passion was Judo, where he was both an excellent coach and Scottish Champion, representing both Scotland & the UK at International level. He then moved into MMA (Mixed Martial Arts), becoming a British Medalist in MMA and a Semi Professional Fighter. However, on a visit to Canada in 1999, Sasha discovered CrossFit. He describes himself as ‘bambi on ice’ after trying FRAN which broke him!   He was shocked to discover that CrossFit was tougher than any training regime he had tried before but also far more rewarding. He was an overnight convert and has been working hard to open CrossFit Skirmish ever since.   In addition to CrossFit Certifications, Sasha is a qualified Judo and British Weight Lifting Coach.   He has his own successful Fitness & Supplement Shop Battlebox.co.uk, CrossFit Skirmish’s online shop and has also worked with Dimitri Klokov, the CrossFit and lifting legend, completing Dimitri’s ‘Winner’ Seminar course. 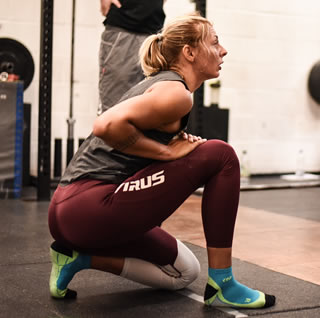 Lenka Aknaiová joined our coaching team in 2018.    Originally from Sobesovice, in the Czech Republic, Lenka started her professional career in the media, working in production at a local TV station.   Whilst she was doing this job she also volunteered as a youth worker, doing educational workshops and coaching for young people on a broad range of topics including careers advice and sexual health.  It was during this time that she realised she loved coaching and helping people achieve their goals.   Although she enjoyed her work, Lenka is adventurous so when she was given the opportunity to travel to the UK in 2011 to become an au-pair she jumped at it.  She realised that she could learn English and learn new skills too.  On arrival in the UK she started going to the gym but then quickly discovered CrossFit. Although she didn’t have a local box, she started trying CrossFit workouts online, realising that she loved getting fitter and loved the competitive Sport of CrossFit.    On arriving in Scotland she approached CrossFit Skirmish, and although initially based in Fife, she apprenticed with us for over a year before successfully passing her CrossFit qualifications.   Lenka is a dedicated coach who has impressed us from day one with her love of coaching and the commitment she puts into supporting every member.  We are delighted to have her on team.

Our Tasters are fun, designed to give you a flavour for just how good CrossFit and CrossFit Skirmish is –
so far, 95% of those who have tasted, have joined!

You can find out more about which cookies we are using or switch them off in settings.

You can adjust all of your cookie settings by navigating the tabs on the left hand side.

Strictly Necessary Cookie should be enabled at all times so that we can save your preferences for cookie settings.

If you disable this cookie, we will not be able to save your preferences. This means that every time you visit this website you will need to enable or disable cookies again.